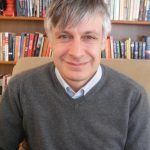 Peter Levine is one of the country’s leading scholars in the area of civic engagement. He is the Associate Dean for Research and Lincoln Filene Professor of Citizenship & Public Affairs in Tufts University’s Jonathan Tisch College of Civic Life and author of “We Are the Ones We Have Been Waiting For: The Promise of Civic Renewal in America.”

The very idea of civic engagement has changed drastically in the past decade or so as communities form online instead of in person. Does this mean young people are more likely to become engaged in civic and political issues? And, will that engagement translate into votes? Peter and his colleagues study these questions and will be watching closely heading into November’s election.

The interview with Peter also touches on what today’s young people can learn from their predecessors 50 years ago. We heard from Tommie Smith about the struggles he faced in 1968; Peter reflects on how civic engagement looks different today and how students today can keep activism alive.

For more information on Peter’s work, visit the Center for Information and Research on Civic Learning and Engagement at civicyouth.org or his website at peterlevine.ws.

Interview Highlights [7:00] What do you think about the activism of Generation Z?

Peter: I am excited about what they’re doing. I would attribute a lot of this to good civil education. I also think its relevant that they’re coming to age in an era of political energy and engagement. While I wouldn’t say this is exactly the dawning of generation z, I would say it is the beginning of a very interesting time in American history.

[8:15] How can people find a common ground to facilitate discussions on difficult topics?

Peter: I wish I had a good answer for this. For example, the gun debate is a good one to have but I’m not sure how much change it can lead to. I think the kids protesting for gun control have the right to do that. However, they shouldn’t be carrying the burden to do so. Also, it isn’t their responsibly to lead a balanced debate on the topic. They are allowed to advocate for their specific stance on the issue.

[11:00] We are in a very important anniversary year of 1968. What can youth activists learn from their predecessors fifty years ago who found themselves in a contentious time?

Peter: The most inspiring stories to me are the high points of the civil rights movement during that time. There is also a lot to be learned from that movement. For example, it’s important to teach students that Rosa Parks wasn’t just some tired old woman who had simply had enough. We should teach kids that in fact she was a long time activist with the NAACP, and that this was a planned political action. This teaches kids how to operate activism today.

[12:20] How do you ensure that proper history is being thought to kids?

Peter: There are several problems with ensuring accurate teaching of this history. One problem is that its presumed that this civil rights movement was led by a relatively small number of individuals. Most of them being men. Also, it is incorrectly described to children as a rather spontaneous movement and development. When it reality, it was a long fight that is still being fought today.

[13:00] Do you thin that social movements today still need the sort of big movement leaders of the 60’s?

Peter: This is difficult to balance. Especially given the fact that we’re in a time of celebrity politics where our president is in the position due mostly to his celebrity status before taking office. On the other hand, we have social movements that are almost allergic to any one figure being the leader. They don’t’ like to structure themselves with strong leaders. Occupy Wall street would be a good example of this disdain for structured leadership within a movement. There is absolutely a less prominent role within these movements than the movements of the 60’s. It feels like a rapidly shifty terrain where we have an increased value of celebrity along side of movements that are focused on not having specific leadership structures.

14:30: Another key question about youth engagement is whether or not they’ll vote. What is your take on this aspect of the issue?

Peter: I do think they’ll boost youth turnout. However, it will be an increase from a terrible point in the last election. This turnout will also make a difference in terms of who will win these races. For example, the different results in the 2006 and 2014 midterm races can be explained by the variation in youth voting. I think the Parkland kids have a potential to impact turnout by a few percent specifically because of their focus on getting out the vote.

Peter: It had been pretty bad for a long long time. There are many relevant factors leading to this. Part of the problem is that there isn’t a concerted effort to getting out the youth vote. Many tend to ignore the youth vote. While we see good youth turnout in the presidential races, this dips considerably in mid term races. This is due partly to the fact that smaller local races don’t have the resources to target the youth vote. Also, it is easier for young voters to get to the information they want without having to come in contact with information about their local races. This negatively impacts their interest and therefore their participation in these races. Also, young people are less connected to large institutions that would have informed them of these local races.

[17:45] Do you see anything coming up to replace these traditional institutions that used to get the youth involved in voting?

Peter: I think there is a variety of possible replacements. From social media to apps, there are many places for young people to gather. However, none of them have the infrastructure or business model of the traditional media outlets or churches from the 50’s. It is mostly a question of how to transform these possible replacements into more substantive long term institutions. I don’t think we have that yet. The channels available now weren’t designed specifically to be these new institutions. This is also causing a problem.