Fake news, clickbait, and the future of local journalism

Can philanthropy save local journalism? Are the calls of “fake news” from Washington impacting the work of journalists in other parts of the country? We discuss those questions and the role of the free press in a democracy with Halle Stockton, managing editor of PublicSource in Pittsburgh. 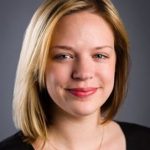 PublicSource is a nonprofit journalism organization in the style of ProPublica, funded primarily by Pittsburgh’s foundation community. Halle talks about how PublicSource’s funding model impacts its reporting, ways that the organization is breaking the fourth wall to engage with readers, how the team responds to allegations of “fake news” while doing in-depth reporting, and why they’ll never write clickbait.

Halle is a Penn State alumna and was the 2018 Hearst Visiting Professional in the Donald P. Bellisario College of Communications.

Interview Highlights [6:00] What is PublicSource and what is your role there?

Public Source is a non-profit independent, digital first media organization, so in human speak that means that we are focused on in depth and investigative journalism in the Pittsburgh region.

[7:37] How does PublicSource fit into Pittsburgh’s media landscape?

[8:48] What role does the community itself play in that, in terms of feedback you get?

We engage with the community quite a bit via social media but also in person. A couple of the ways that we interact with people, are one, through educational events we call citizens tool kits.

[13:35] How do you strike the balance between catching people’s attention and writing hard-hitting stories?

We’re never going to fall victim to clickbait. That’s just something that we’ve decided we cannot do. We firmly believe that people’s stories, seeing other people going through things is catchy enough.

[14:50] Are you and your team feeling the impact of the attacks agains the media that are coming from Washington?

Surprisingly enough, even in Pittsburgh, it started off as sources kind of laughing about it like “oh are you the fake news?” but even in the past few months when we’ve had some really important stories drop, those institutions who we’ve pressured in those stories through our reporting, we have heard rumors about them trying to cast us as fake news.

[16:38] What role do foundations play at PublicSource?

[19:06] What impacts have you seen from your reporting?

One of the most recent ones was with Chatham University, it’s a small university in Pittsburgh, it used to be all female, and recently moved to co-ed, and we reported on a policy in their honor code. It was a policy that treated self-harm as a disciplinary matter. The stories of students who had been expelled or dismissed from campus housing for incidents of self-harm, suicidal ideation, and suicidal attempts , those had been never told.When we put tit [the story] out, within 24 hours the university launched a task force to review it [the policy].

[21:18] Where do you see PublicSource going looking forward?

There are a lot of opportunities. Right now, we’re really focused on the Pittsburgh region. I think in the future there’s opportunity and possibility that we could have somebody in Harrisburg covering state governmental issues in the Public Source way.