Generation Z and the future of democracy

Over the past few months, the members of Generation Z have combined the tenets of traditional social movements with the power of social media to reimagine what it means to protest in a democracy. That energy was on display during the March for Our Lives events held around the world on March 24. 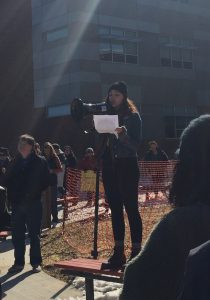 Kayla Fatemi speaks at the State College March for Our Lives event.

We interviewed several students from State College, Pennsylvania (where our podcast is based) who attended March for Our Lives events locally and in Washington, D.C. They speak passionately and articulately about what they believe in and how they’re working to carry forward the energy they’ve create

In this episode, you’ll hear from:

If what we saw and heard from these students is any indication, the future of our democracy looks very bright.

Interview Highlights [6:34] Kyra on activism and motivation for the march for our lives event.

With everything happening this year, it felt natural to set up these events and continue to make our voices heard. I want to do what I can within my constraints. I can’t vote for a number of years, but I can work with those who can and who set up events like this I can go up there, I can make a speech, and I can make my voice heard. I will continue to do so until I can hear and see change.

[7:48] Kayla on activism and the movement towards creating change.

One good thing about the United States in the right to free speech and the right to express ourselves and to vote. Democracy for us is voting in those who will be advocating for our lives. This was something I felt I had to do. I think many other students had the same feeling after watching the Parkland students who are our peers. We are a different generation than the millennial generation. We are a lot more vocal and a lot less afraid. We’ve seen a lot of things happen (school shootings) and if something is going to happen we are going to have to do it ourselves. Our generation is finally becoming old enough where we can go out there and do these sort of things. We are continuing to work on voter registration. We also have another school walkout scheduled for April 20th, which is not sponsored by the school.

[10:19] Lena Adams from Delta Middle School on how students created a similar march at their school.

We worked really hard at getting to participate in the walkout without any school suspensions. The majority of our school walked out to support changes in gun legislation and to memorialize the victims (Parkland). I thought that was really cool.

[10:48] Lilly Caldawell on the student protest at Delta.

After Parkland, I had heard about the walkout and I wanted to start something similar at our school. I’ve seen some of my friends here today which is awesome. I think it’s amazing that it is the youth, even middle school students who are really starting to notice and take action. This will bring attention to politicians that they need to take more action. We can’t just say ‘thoughts and prayers’ in hopes that will fix the situation.

Interview with Hanna Strouse and Cian Nelson [11:48] Can you describe your first impression of the March For Our Lives in Washington D.C.?

Hanna: I had been to the Woman’s March before so I sort of expected a large crowd, but I thought it was actually tighter when I was actually out there in it, which I was not expecting at all.

[13:44] As you’ve had a chance to reflect on your experiences, are there any moment in particular that stand out to you?

Hanna: All of the speakers were amazing. I respect them so much. They’re my age and they’re speaking infant of 800,000 people. To be honest, all of them are doing outstanding things, and that is really resonating with me. Our generation is going to be the one that really hammers hard on this whole gun control thing. We are going to be the ones really standing up for this change.

Cian: It made me feel really good to be a part of generation Z. The one speech that really stood out to me was from Emma Gonzalez and her six minutes of silence representing all the time it took for those seventeen lives to be taken. It was sort of outstanding and horrifying at the same time.

Hanna: It (six minutes of silence) felt awkward. I was confused, but when she said this was the amount of time it took for seventeen of her classmates to die I realized that was no time at all. It felt like forever when it was silent. Imagining your in a classroom where you have to stay quiet during that amount of time is terrifying.

[15:53] Is there any characteristics of your generation that you think will maybe take things in a different direction or reach progress we haven’t seen thus far?

Cian: Generations are becoming more progressive over time in my opinion. Our generation is the tech generation. We’re the only generation to not remember a time before the internet. We know how to utilize it. We’re set to become the most educated generation yet.

Hanna: I also feel that we’re fed up with the things that have been happening. I’m 18 and I know so much about what is happening in our government, and it is making me angry that nothing is being done to prevent things like Parkland. It just makes us angry. With this digital age, we have this opportunity to put out our anger for more people to see, which is really helping.

[17:12] So tell us about your family growing up. Are you from political households and have you guys talked about politics a lot?

Hanna: So my family is very political. My dad is involved in the local government, so I started to get really into it. I wanted to know what he was talking about so I would research what he was saying and I made my own opinions. My family is very liberal, but I feel that we do have some differences in our opinions and in how we approach things.

[17:56] Have you noticed in these past couple of weeks since the shooting any change or increase in activism amongst your friends or other people at school?

Hanna: There are first time protestors, but I feel like it hasn’t changed very much. Our generation is stigmatized for being lazy and unengaged. But I feel like we have that stereotype because we are afraid to engage because everyone tells us we can’t.

[21:16] Do you sense any division among your generation about the best way to move forward and see the change you want to have happen?

Hanna: There are some divisions. I know there are some people calling for a total gun ban. I know others who are calling or an assault rifle ban. I know some who are just calling for background checks. I feel any of those options would do amazing things, and would save so many lives. It’s just a matter of how far you’re willing to push it.

Cian: This might be unrealistic, but I think we should go as far as Australia and Japan.

Hanna: Also, the say they (Australia and Japan) handle giving guns is very interesting. If you look at Japan, they have to go through a background check, a physical health screening, a mental health screening, and then they do classes. They then have police who make sure you’re storing them correctly. Why don’t we do that here. It has saved so many lives in Japan.

[22:48] Did being at the march and hearing from the students talk about the communities who are not represented make you reconsider your own background and your own privilege?

Hanna: I know that I’m have a lot of privilege because I’m a white American. While, as a woman, I couldn’t walk a city street at night, I could do it during the day time. I wouldn’t be shot for walking down the block. I know that this is a really big problem for people of color. Many of them don’t feel safe in their cities. That is so saddening to me. I have no idea how that must feel,

Cian: I know that I’m a white straight male. I feel like I don’t have any right to complain about anything and that I should just let minorities do the talking. I agree with that because they’re the ones experiencing these tragedies and inequality.

Hanna: I do think it’s amazing that the face of this movement is a bisexual Cuban female. That just speaks volumes at to how diverse the movement is going to be. The fact that we have someone not male, white, or straight as the leader is kind of amazing.