One of the things we talked about in our episode with How Democracies Die author Daniel Ziblatt is the “grinding work” that it takes to make a democracy function. School board meeting rooms around the country are some of the places where that happens at the grassroots level. 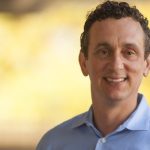 If you’ve ever been to a school board meeting, you know that they’re not always exciting. However, the work that these boards do directly impacts the schools, the children who attend them, and the community at large. Board positions are not full-time and the people who hold them are rarely career politicians. Rather, they’re everyday citizens who want to make an impact — exactly the type of people come together to make democracy work.

We talk about the role that school boards play in a democracy with Robert Asen, a professor of rhetoric, politics, and culture at the University of Wisconsin-Madison. Asen is the author of Democracy, Deliberation and Education, which is based on a yearlong study of three school boards in Wisconsin. While the examples he references are specific to Wisconsin, it’s easy to hear the conversations and deliberations playing out at schools across the country.

Interview Highlights [6:00] What are the factors that motivate people to join a school board?

Robert: What connects people to these groups are often times their own experiences, including those with their children. There were others who didn’t have children at the school, but saw the school board as an opportunity to get involved with their community.

[7:30] Did you find that people joined the school board because there was a particular change they wanted to see?

Robert: It wasn’t the case for everyone, but there were some who wanted to see particular policy be passed. Across the districts we looked at, there was a more general sense of bringing about change in an effort to improve the schools. They were more focused on improving the lives of students rather than any one particular issue.

[8:40] While these board members are voted on, they are not what we would think of as politicians. How does this play out?

Robert: One of the things that separates these governing boards from other types of elected positions is that these members are not politicians. They don’t have dedicated staff or resources. Many of these members also worked another full time job. This was an additional burden they decided to take on. There are many democratic institutions in our society run by people without formal government education or training. However, they manage to succeed nonetheless. There really is a strong sense of connection to community here. These board members very much see themselves as part of the community working to improve things for citizens.

[11:10] How are these members successful without being career politicians?

Robert: What I mean when I say they succeed is that they are able to make what they believe to be the best decision for the community moving forward. To be successful in this type of setting is to have a sense of what is it that they want to achieve. In this case, they succeed because they’re in communication with education professions and are able to reach their collective goals.

[12:30] Surely there is a good amount of compromise being reached in order to get things done. Can you speak to this in your research?

Robert: There was one example in particular that comes to mind here. One district was considering a proposal from a student group to create a gay student alliance. One board member spoke about his personal experience with this group given that his own son was friends with one of the students trying to create the group. He described him as just your average kid. He described them as normal good kids rather than some political revolutionaries looking to upend the community. He also talked about his own teenage years and how he and his friends might have acted inappropriately around this subject. He spoke about how times are changing and the fact that these kids just wanted a way to meet and be recognized in a group. Here, it was more about practicality winning in the end.

[14:50] What about school boards enables them to tackle difficult issues that other institutions can’t?

Robert: School boards certainly do struggle with deliberation and decision making. However, there are different approaches taken here to solve difficult problems than say within state and federal institutions. The way that polarization manifests at the local level is much different than at the state or national level. We know that communities can sort of segregate themselves naturally along racial and economic lines. This leads to small or medium school districts that may be completely contained within these homogenous areas along what can be rather divisive lines. There is also a unique sense of community. These members feel as though they are a part of the communities that they are impacting with their decisions. This goes a long way towards these bodies reaching important decisions for their institutions.

[19:20] How do school boards work with district administration?

Robert: That is usually the most important and difficult relationship for a school board. When these two work together, a lot can be accomplished. However, when they’re at odds, that can undermine all of the decisions within a district. Everyone has to negotiate their roles. When these relationships begin to break down it is because of a collapse or misunderstanding of each others roles.