When states sue the federal government 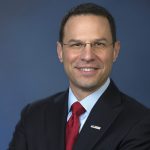 How do those lawsuits take shape? How does a state decide whether to join or not? How does that impact the balance of power between federal and state governments? This week’s guest is uniquely qualified to answer all of those questions.

Since taking office in January 2017, Pennsylvania Attorney General Josh Shapiro has been involved with more than a dozen suits brought against the federal government on matters ranging from family separation at the border to EPA emissions regulations. Though Shapiro is a Democrat, he says his chief motivation in joining these suits is the rule of law and a commitment to do what’s right for people of Pennsylvania.

Whether or not you agree with Shapiro’s politics, he does present an interesting take on the role that states play as a check on the federal government. This power is a unique part of the American experiment and speaks to the power of democracy in the states.

Before the interview, Chris and Michael dive into the origins of federalism, including Federalist 51, the 10th Amendment, and the Emoluments Clause of the Constitution.

Pennsylvania Office of the Attorney General

Discussion/Reflection Questions Interview Highlights [5:12] When you took this office, did you expect yourself to be this active on federal issues?

Shapiro: I said when I was sworn in that if someone was going to try to mess with Pennsylvania that they would have to go through me. I see the constitution as giving the states broad authority. States rights isn’t something progressives have pointed to, but it is something I value. If someone in the federal system is doing something to undermine our rights, I’m going to stand up to take action.

[6:32] How do one of these suits against the federal government get started?

Shapiro: The first question is whether the action comports with the rule of law. I put aside what I agree or disagree with personally and instead focus on the law. Once we deem that an illegal action has been taken, be think about what is the best way to file an action to challenge that activity. We discuss whether or not Pennsylvania should be the lead state. There are sometimes strategic reasons why we file a suit in a particular state. What we are not doing is constructing opposition to the president just for the sake of opposing him. What we are doing is organizing ourselves around the rule of law.

[8:43] What issues or possible suits have you turned down?

Shapiro: We’ve been involved in about fifteen cases since taking office. I’m very careful about what we engage in on behalf of the people of Pennsylvania. Again, it is not my job just to weigh in whenever I personally disagree with the president. It is my job to weigh in when the rule of law is being threatened.

Shapiro: I spend the majority of my time going around to differnt places listening to people. I think I have a good feel for where the people of the state are. I don’t poll test these issues. Instead, I try to do what is right and what adheres to the rule of law.

[10:36] Under Obama, we saw a lot of states file suits against the federal government much like what is happening now with Trump in office. Do you think this goes to the partisan nature of government?

Shapiro: I would actually push back on that a little. Most of what I do is bipartisan. It’s just that the media usually doesn’t report that. The vast majority of the actions we take are really bipartisan.

[12:34] President Trump has stated that he thinks the attorney general office should be more of a political one. What are your thoughts on that?

Shapiro: We are above politics in this office. I’m a proud Democrat. People know I have progressive leanings. They knew that when they elected me. However, we check our political views at the door everyday when we come into the office. If you look at our track record, we’ve held democrats and republicans accountable. We do our job in a way that the people of the state can be proud that the justice system is fair. We are diverse in both appearance and thought.

Shapiro: It is the very foundation of everything that I do. It helps you be above politics. My job is to understand the law, apply the facts and evidence, then make a decision in the best interest of the people of Pennsylvania.

Shapiro: The tenth amendment makes it really clear that states have a role to play in our democracy. I believe that if the federal government is making an overreach into our state business, then I’m going to be a shield to guard against that. However, states have also at times been the thing infringing upon rights. However, more often than not, they are expanding rights. The fight for marriage is a perfect example of that. Justice Brandies spoke eloquently about states being the laboratories for democracy. That still holds true today. States need to be a shield against overreach and a sword in promoting the rights of their citizens.